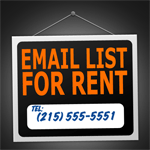 So I’ve been doing some ad buys for clients, myself, testing,
etc etc, and I’ve learned a LOT! I can’t share everything I’ve
learned…but I’ll share some good stuff 😉

First of all there are a TON of email lists to rent! Over the past
several months I’ve compiled a huge list on rented/rentable
email lists. There are lists in across a wide range from newsletters,
to list brokers, small blogs, to big blogs. It’s quite a list.

It’s a shame it took me this long to build this list, but frankly
…I like affiliates better 🙂

Second, most of the lists have owners/brokers that are pretty
easy to work with. They get back to you quickly, they give you
their ‘expected’ stats, and (of course) are nice because they’re
trying to get a sale 🙂

I’ve contacted some that don’t reply to emails or calls. That’s
odd to me, but hey it happens. If they don’t get back to me
I mark it down on my list as ‘people who clearly hate money’ 🙂

I’ve spent a LOT of my own money testing several of
these lists and display brokers….

So what have I learned from testing a lot of lists and
ad sources?

First, only TWO sources (so far) have delivered on claims
and delivered good results…

See, they’re representing a list/source that they CLAIM
is full of buyers and traffic and roses and unicorns and
blah blah…

But when it’s time to deliver…a big ol turd comes instead.

I’ve spent a lot of money on lists that didn’t get anywhere
NEAR their claims…and it’s shameful.

If you have a good list…then back it up.

Now, first I know that the offers convert…at LEAST on the
front end. If it’s an email, I KNOW what the subject line
averages on the open rate and once opened,I know about
how many clicks turn into leads.

I’m no dummy…this isn’t my first rodeo and I don’t blindly
spend money on promos that I have NO baseline of results
on…come on.

But what’s crazy is when, instead of admitting awful list
management or ad source, they blame the offer, copy,
time of the year, economy, the smells from the tulips, etc.

So as much as it drives me crazy…I mark it down, and
move on…but BOY does it burn me up sometimes 🙂

But you know what…

If I didn’t TEST these sources…I WOULD HAVE NEVER KNOWN!

So what’s the takeaway for YOU…

1. If you want an intro to the two good sources I’ve been using,
just email me (brad@bradstafford.com). I’ve tested a bunch and
these two are the best…email AND display/social media.

2. TEST!! Sometimes you’ve gotta put your money where your…
marketing funnel is :). Do I hate not getting a great ROI on
everything I do…sure. Is it a fact of life that not everything
works as well as you hope/people claim…yes.

So deal with it…if you test on a list or source that doesn’t
do well…chalk it up to experience and move on.

P.S. I’m NOT done buying and testing by a long shot! I’ve
got new offers, new lists, new sources that all need testing.

P.P.S. I forgot to mention something about the ad buys I’m
doing…

I want ALL these advertisers to become affiliates of my clients.

CAN MY STRATEGY GET YOU MORE CUSTOMERS?

CAN MY STRATEGY GET YOU MORE CUSTOMERS?